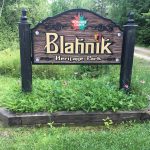 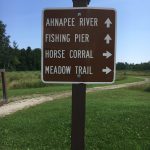 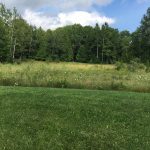 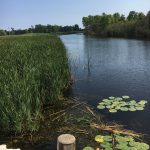 Blahniks have lived in the Town of Ahnapee since 1855 when George and Katharine (Blaha) Blahnik arrived here from Bohemia with their five sons.

Wenzel, a grandson  of  George and Katharine, farmed in Ahnapee, along with his wife Dorothy.   Wenzel and Dorothy owned 23 acres of property along the Ahnapee River.   When Wenzel died, he willed the land to his daughter and son-in-law, Evelyn and Paul Brookhyser of Newport, Oregon.   The Brookhysers decided to donate the property to the county to be used as a park.

The land is a prime spot, located between the Ahnapee River and the Ahnapee Trail.   The nature trails leading through the woods to the river provide easy access to fishing and picnicking as well as cross-country skiing, bird watching, dog training, canoeing, and science education.   The area also welcomes snowmobilers, horseback riders, and bicyclists.

The park was dedicated September 23, 2008.   Blahnik Heritage Park is located about three miles north of Algoma off Hwy 42, one half mile west on Washington Road. 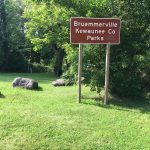 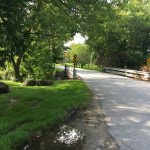 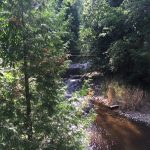 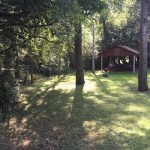 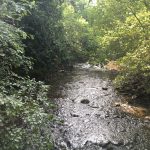 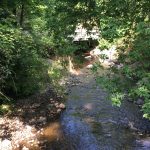 Henry Bruemmer, a native of Mecklenburg, Germany, learned the milling trade in his native land before emigrating.   After spending a few years on the East Coast, he invested in  a flour mill in Mishicot before erecting a mill at Tisch Mills.   In the mid 1860’s, he and his family moved to what is now known as Bruemmerville where he purchased an interest in the Ahnapee Mill, eventually becoming the sole proprietor.

In addition to a flour and feed mill, the Bruemmer family enterprise also included a saw and planing mill.   The mills were powered by water supplied by a dam on Silver Creek (the South Branch of the Ahnapee River) as well as steam power when necessary.   A dam was constructed in the early 1920’s.

Besides the mills, Bruemmerville eventually included an ice house, brickyard, cheese factory, two livery stables, and a tavern (part of which was built in 1875 by Rudolph Bruemmer and is still in the community) as well as several homes including those owned by members of the Bruemmer family.

At one time, the mills made this one of the busiest areas of the county.   The two stables were said to be able to hold up to 300 horses.   However competition from other mills eventually led to the closing of the operation in the mid 1940’s.

The land was purchased by William Stoller & the mill was torn down.   The dam site and mill pond were purchased by the county in 1950 and the area is now a county park.   The dam was removed in 2012.   The park has a shelter with picnic tables and is a popular spot for fishing.

Most of this article was taken from the sign that is posted in the park.